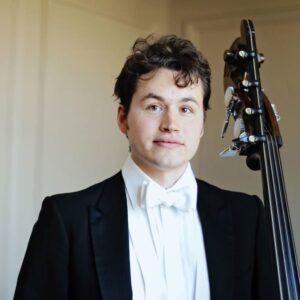 Minnesota native Kevin Brown began playing the bass at age 3. He has since gone on to perform with esteemed ensembles across the United States in a burgeoning career that has led him back to the Midwest as principal bass of the Detroit Symphony Orchestra, and Associate Professor of Double Bass at Michigan State University.

Kevin completed his bachelor’s and master’s degrees at Rice University as a student of Paul Ellison. While at Rice, Kevin performed extensively with the Houston Symphony, including tours to New York and Moscow. In 2009 he won the International Society of Bassists Orchestral Competition, earning a week as a guest in the Philadelphia Orchestra bass section. Before his appointment to the DSO in 2014, Kevin also appeared as guest principal bass of the Atlanta Symphony.

Beyond orchestral performance, Kevin is an active soloist and chamber musician. Kevin has collaborated with the Great Lakes Chamber Music Festival, regularly gives recitals, and gave his concerto debut with the Detroit Symphony Orchestra in 2015.