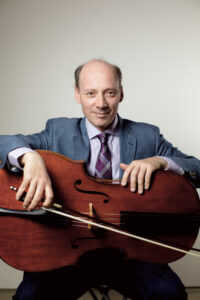 From 1999 until its final season in 2013, Clive Greensmith was a member of the world-renowned Tokyo String Quartet, giving over one hundred performances each year in the most prestigious international venues, including New York’s Carnegie Hall, Sydney Opera House, London’s South Bank, Paris Chatelet, Berlin Philharmonie, Vienna Musikverein, and Suntory Hall in Tokyo.

In 2013, following the final concerts of the Tokyo String Quartet, Greensmith joined the faculty at the Colburn School where he is currently a professor of cello and coaches chamber music for the Conservatory of Music and the Music Academy.

In July 2019, he succeeded Günther Pichler as director of string chamber music at the Accademia Chigiana International Festival and Summer Academy in Siena, Italy. Also in 2019, Greensmith became the Artistic Director of the Nevada Chamber Music Festival.

Greensmith is a founding member of the Montrose Trio with pianist Jon Kimura Parker, and violinist Martin Beaver.