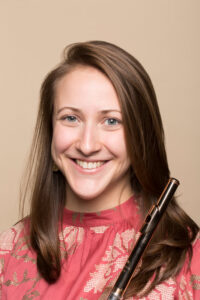 A native of Richmond, VA, Hannah began studying the flute with her mother, Alice Hammel. She holds a BM in flute performance and a minor in music theory from The Oberlin Conservatory (2015) where she studied with Alexa Still. She graduated with her MM in flute performance in 2017 from Rice University’s Shepherd School of Music as a student of Leone Buyse.