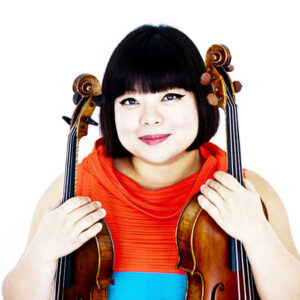 Yura Lee is a multi-faceted musician, as soloist and as a chamber musician, and one of the very few that is equally virtuosic in both violin and viola. She has performed in major orchestras including those of New York, Chicago, Baltimore, Cleveland, San Francisco, Los Angeles, to name a few. She has given recitals in London’s Wigmore Hall, Vienna’s Musikverein, Salzburg’s Mozarteum, Brussels’ Palais des Beaux-Arts, and the Concertgebouw in Amsterdam. At age 12, she became the youngest artist ever to receive the Debut Artist of the Year prize at the Performance Today awards given by National Public Radio. She is the recipient of the 2007 Avery Fisher Career Grant, and the first prize winner of the 2013 ARD Competition.

Lee is a member of the Chamber Music Society of Lincoln Center, and the Boston Chamber Music Society. She is an associate professor at the USC Thornton School of Music in Los Angeles. Lee plays a fine Giovanni Grancino violin kindly loaned to her through the Beares International Violin Society by generous sponsors. For viola, she plays an instrument made in 2002 by Douglas Cox.