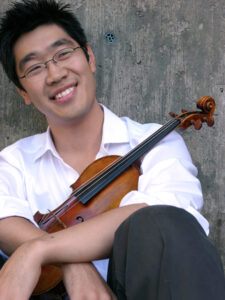 Korean-American violinist Soovin Kim is an exciting player who has built on the early successes of his prize-winning years to emerge as a mature and communicative artist.  After winning first prize at the Niccolò Paganini International Competition, Kim was recipient of the prestigious Borletti-Buitoni Trust Award, an Avery Fisher Career Grant, and the Henryk Szeryng Foundation Career Award. Today he enjoys a broad musical career, regularly performing repertoire such as Bach sonatas and Paganini caprices for solo violin, sonatas for violin and piano by Beethoven, Brahms, and Ives, string quartets, Mozart and Haydn concertos and symphonies as a conductor, and new world-premiere works almost every season.

In recent seasons he has been acclaimed for his “superb…impassioned” (Berkshire Review) performance of Alban Berg’s Chamber Concerto at the Bard Festival with the American Symphony Orchestra and a “sassy, throaty” (Philadelphia Inquirer) rendition of Kurt Weill’s concerto with the Curtis Chamber Orchestra. Other unusual concerto collaborations included Mendelssohn’s Double Concerto with conductor Maestro Myung-Whun Chung and Beethoven’s Triple Concerto in Carnegie Hall. He has performed with the Philadelphia Orchestra, San Francisco Symphony, Stuttgart Radio Symphony, Salzburg Mozarteum Orchestra, and the Seoul Philharmonic and Accademia di Santa Cecilia Orchestra with Maestro Chung.

He maintains a close relationship with the famed Marlboro Festival where he regularly spends his summers, and founded the Lake Champlain Chamber Music Festival in Burlington, VT, in 2009. In May 2015, he received an honorary doctorate degree from the University of Vermont in recognition of his contributions to the community. In Korea, he is well-known as a member of MIK, his ground-breaking piano quartet ensemble. He recently launched the Chien-Kim-Watkins Trio with his wife, pianist Gloria Chien, and cellist Paul Watkins.