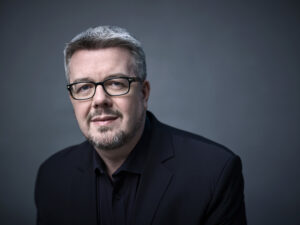 Acclaimed for his inspirational performances and eloquent musicianship, Paul Watkins enjoys a remarkably varied and distinguished career as concerto soloist, chamber musician and conductor. He is the artistic Director of the Great Lakes Chamber Music Festival and in 2019, he was appointed Professor of Cello at the Yale School of Music.

He regularly appears as concerto soloist with orchestras throughout the world. Recent concerto highlights include a BBC Proms appearance performing the world premiere of his brother Huw Watkins’ Cello Concerto and a tour with the European Union Youth Orchestra under the baton of Bernard Haitink.

A much sought–after chamber musician, Watkins was a member of the Nash Ensemble from 1997 until 2013, when he joined the Emerson String Quartet. With the Quartet he has travelled extensively, performing at major international festivals including Tanglewood, Aspen, Ravinia, Edinburgh, Berlin and Evian, and has collaborated with eminent artists such as Emanuel Ax, Yefim Bronfman, Evgeny Kissin, Renée Fleming and Barbara Hannigan. He is a regular guest artist at the Chamber Music Society of Lincoln Center, where he recently performed the complete Beethoven cello sonatas with Alessio Bax.

He has conducted all the major British orchestras and a wide range of orchestras throughout the world. In recent seasons he made his conducting debuts with the Minnesota Orchestra, Detroit Symphony, Omaha Symphony and at the Lake Tahoe Music Festival. He was the first ever Music Director of the English Chamber Orchestra, and also served as Principal Guest Conductor of the Ulster Orchestra from 2009 to 2012.

Watkins has made over 70 recordings, including 18 solo albums for Chandos. Recent critically acclaimed releases include the Walton, Delius, Elgar and Lutoslawski concertos, as well as discs of British and American sonatas with his brother, Huw Watkins. His first recording as a conductor, of the Britten and Berg violin concertos with Daniel Hope, received a Grammy nomination.

Watkins plays on a cello made by Domenico Montagnana and Matteo Goffriller in Venice, c.1730.