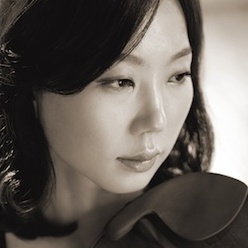 Acclaimed as “a wonderfully talented violinist…whose sound and technique go well beyond her years,” Yoonshin Song was born in South Korea where she began her musical studies at age five. Making her solo debut with the Seoul Philharmonic at age 11, she has since built a successful performing career throughout Korea, the United States and Europe.

Song earned many prestigious prizes throughout her career. Some highlights include top prize awards in international violin competitions such as the Wieniawski (Poland), Lipizer (Italy), Henry Marteau (Germany) and first prize at the Stradivarius International Competition in the U.S. In her native South Korea, Song has won virtually all the major national competitions. In addition, Song has received the David G. Whitecomb Foundation Award and the Korean Minister of Culture’s Award.

Song earned her Masters degree and Graduate Diploma under the tutelage of Donald Weilerstein at the New England Conservatory and completed the Artist Diploma and Professional Study programs at Manhattan School of Music, where she studied with Robert Mann and Glenn Dicterow.

Since 2012, Song has been the Concertmaster of the Detroit Symphony Orchestra, and has enjoyed close collaborations with inspiring guest artists such as Gil Shaham, Joshua Bell and Jamie Laredo, among others.

Song currently plays on a 1707 Vincenzo Rugeri violin on loan to her by a generous sponsor in Michigan. She teaches at the University of Michigan.