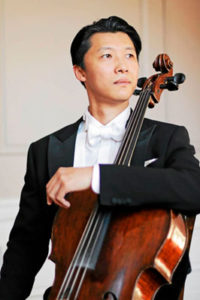 Wei Yu is the Principal Cello, the James C. Gordon Chair, of the Detroit Symphony Orchestra. He made his subscription debut performing Dvořák’s Cello Concerto. Before joining the DSO, Yu was a member of the New York Philharmonic for seven seasons.

An avid chamber musician, Yu has been invited to the Marlboro and Ravinia music festivals, and has recently collaborated with musicians such as cellist David Soyer, pianists Richard Goode and Menahem Pressler, violinists Midori and Pinchas Zukerman and members of the Guarneri and Juilliard Quartets. As a member of the New York Philharmonic Ensembles, he makes regular appearances at Merkin Concert Hall.

In the summers of 1998 through 2000, Yu participated in the Morningside Music Bridge program at Mount Royal University in Calgary, Canada. He subsequently enrolled in the University’s Gifted Youth program under the tutelage of John Kadz and is currently on the faculty of the Morningside Music Bridge program. He has given cello master classes at universities and festivals in the United States, Canada and China.

Born in Shanghai, China, Yu began studying the cello at age 4 and made his concerto debut at age 11, performing Elgar’s Cello Concerto with the Shanghai Symphony Orchestra. He received his B.M. from North Park University in Chicago and M.M. from the Juilliard School. His principal teachers include Mei-Juan Liu, John Kadz, Hans Jørgen Jensen and David Soyer. He performs on the 1778 “Ex-Soyer” Gagliano cello, on generous loan from the Marlboro Music Festival.

“Nearly all of the soloists made strong impressions, but special mention must go to new principal cellist Wei Yu… The grace, poise, liquid legato and purity of tone and pitch that Yu produced in these few moments were stunning in their authority and beauty — a very good sign for the future of the orchestra.”