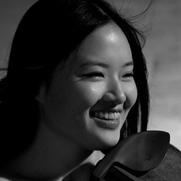 Praised by Seattle Times for “simply marvelous” and Taiwan’s Liberty Times for “astonishingly capture the spirit of the music”, violinist Tien-Hsin Cindy Wu enjoys a versatile international career as a soloist, chamber musician, and educator. She has been featured with the National Symphony Orchestra of Taiwan and the Taipei Symphony Orchestra in her native country, as well as with such European orchestras as the Odessa Philharmonic Orchestra and the Russian State Symphony Orchestra.

As recitalist and chamber musician, Wu performs regularly in Asia, Europe and North America, at prominent venues as Carnegie Hall, Alice Tully Hall, the Metropolitan Museum of Art, Washington, D.C.’s Kennedy Center and Library of Congress, among many others. Artists with whom she has collaborated include Teddy Abrams, Gary Graffman, Kim Kashkashian, Ani Kavafian, Ida Kavafian, Midori, William Preucil, Thomas Quasthoff, Fred Sherry, Yuja Wang, and members of the Alban Berg, Brentano, Guarneri, Miró, Tokyo and Ying quartets. Wu has appeared as guest violist—her second instrument—with the Orion String Quartet and the Dover Quartet. She is currently the Artist in Residence of the Da Camera Society of Los Angeles since 2013.

Wu’s media appearances feature performances on NPR’s “From the Top,” on WHYY TV and Radio in Philadelphia, as well as numerous on-air interviews with Philharmonic Radio Taipei and IC Broadcasting of Taiwan. She has been spotlighted on Taiwan’s TVBS Television and in the September 2004 issue of Marie Claire Taiwan.

Tien-Hsin Cindy Wu received her bachelor’s degree from the Curtis Institute of Music in 2008, which awarded her the Milka Violin Artist Fellowship. In 2010 she graduated from the USC Thornton School of Music, with awards for excellence in both solo string instrument performance and chamber music. Wu’s teachers include Dorothy DeLay, Hyo Kang, Ida Kavafian, Victor Danchenko, Steven Tenenbom, and Midori Goto. She was a member of the string department faculty at the Thornton School of Music of the University of Southern California from 2010 to 2015.

Among Wu’s many honors and awards are the Gold Medal in the 2003 Stulberg International String Competition and third prize in the Odessa International David Oistrakh Violin Competition.
Wu performs on a 1734 Domenico Montagnana violin, and a 2015 Stanley Kiernoziak viola.