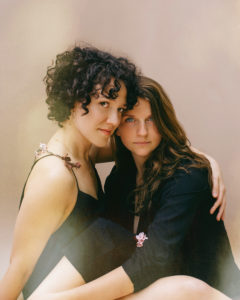 The Furies is a contemporary violin duo whose mission is to bring intersectional feminism into the concert hall through immersive performance experiences that challenge our audience and community, for us to learn more about the histories of women in a white male dominated canon, and to encourage audience members to demand more diverse programming from their musical institutions.

Since their premiere at Oh My Ears festival in Phoenix (Winter of 2018), The Furies has since performed at the Hot Air Festival in San Francisco, the New Music Hollywood series at Urban First Aid, ArtShare L.A., and again at OME (2019). Their programs range in genre, including contemporary classical to experimental works such as that of Olga Neuwirth, Anna Clyne, Eve Beglarian, Vanessa Lann, Laura Cetilia, Elizabeth A Baker, as well as original arrangements of popular songs such as music by Bjork.
Dedicated to inspiring youth to becoming creative and forward-thinking leaders, they presented their first workshop to Little Opera in S.F, spring 2018, and are extending their educational programming into their communities in after school programming.
Their spring season programming is centered around their sixty minute show, A Cure for Hysteria.  This performance piece explores the gendered term ‘hysteria,’ and its social implications. Since its premiere at ArtShare, ACFH has been performed at OME Festival in Phoenix (2019), and will be featured on the Equal Sound series, as well as on the Great Lakes Chamber Festival in Detroit, alongside the imitable Eighth Blackbird, as well as with ~Nois and Juxatonal,  where they will play works by Cassandra Venaglia, a premiere of Gemma Peacocke‘s Cicada, and others.