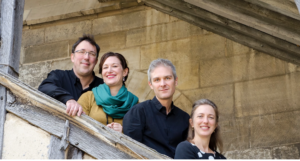 Richter Ensemble is a new chamber music initiative in which the members share a mutual passion for bold artistic expression. Emphasising flexibility and freedom, the group works mainly as a string quartet, but can expand to a larger chamber orchestra. It is fervent about highlighting hidden connections in music ranging from the 17th to the 21st centuries, demonstrated through its innovative programming. Benefitting from members’ vast experiences of performing with leading period ensembles, the Richter Ensemble presents a fresh palette of colors by playing uniquely on gut strings. It seeks to bring spontaneity and new light to every performance and is enthusiastic about collaborating with artists from other fields such as dance and visual media (i.e. projections, installations, art exhibitions, and film). The ensemble has a particular affinity for music from Fin-de-siècle and the Second Viennese School, and strives to reintroduce that music to audiences through a new lens.

Richter Ensemble is quartet-in-residence at the Oficina de Música de Curitiba, Brazil and at San Diego’s summer festival Opera NEO, and appears regularly in concert halls in Europe, Brazil and the United States.  In 2019 the ensemble plans to release its first two CD’s featuring the Second Viennese School and its interdependence to the past.