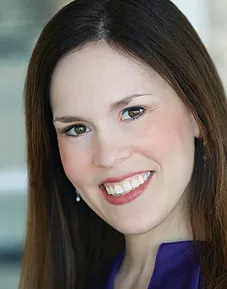 Rachel Gottlieb Kalmowitz is honored to be the Cantor at Temple Beth El in Bloomfield Hills, Michigan. She is pleased to be performing with GLCMF again, having been a guest artist numerous times, most notably performing Harbison’s Mirabai Songs and Barber’s Knoxville: Summer of 1915 with former artistic director, James Tocco.

Prior to assuming her position at Beth El, she was a resident of New York City, where she had a rich variety of musical experiences in opera, musical theatre, and concert work. As soprano soloist, she has performed an extensive repertoire, including Mozart’s Mass in C Minor, Bach’s Magnificat, and Orff’s Carmina Burana. Favorite opera roles include Gretel in Hansel and Gretel, Despina in Così fan tutte, and Monica in Menotti’s The Medium. She had principal roles in Singing With My Demons and Moses, My Love; new plays premiered in New York City, and won a Grand Award for her work as Clara in Sondheim’s Passion. She was also a District Winner in The Metropolitan Opera National Council Auditions.

Rachel received her cantorial certification from Hebrew Union College-Jewish Institute of Religion and a Master of Music in voice performance from University of Michigan, as well as degrees from Eastman School of Music and Interlochen Arts Academy. She lives in Birmingham with her husband, Carey, and daughter, Ilana.