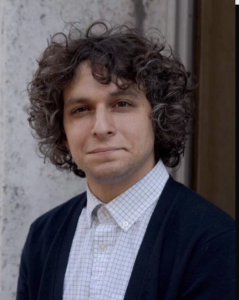 Nicola Canzano (b. 1991) is a composer, harpsichordist and organist who has quickly become recognized as a leading expert in the composition and improvisation of baroque music. He is an enthusiastic proponent of the revival of certain aspects of historical music education, which he believes will allow music students of all persuasions to gain a more well-rounded mastery and appreciation of their art. To this end, Nicola has formed, along with his former classmates from Juilliard’s Historical Performance program, the ensemble Nuova Pratica, as a proof-of-concept. Despite its nascency, Nuova Pratica has given performances of their baroque-inspired compositions and lectures on their development of techniques to improvise partimenti as an ensemble at institutions like Cornell University and the University of Michigan.

Outside of Nuova Pratica, Nicola maintains a teaching studio for students of harpsichord, baroque improvisation, and composition, and feels incredibly fortunate to be in any kind of demand as a composer of baroque music. His compositions in baroque style have earned him performances from William Christie’s gardens in Thiré to the stages graced by Juilliard415, and the classrooms of the University of Oregon, where some of his work is used as part of the theory curriculum under Dr. Timothy Pack. He has written most recently for Juilliard415 and the Stüttgart-based ensemble VERITÀ, besides continuously composing for Nuova Pratica.

Most of all, Nicola delights in making music with others as a continuist, having played under the proverbial batons of Richard Egarr, Nic McGegan and Masaaki Suzuki, with Juilliard415, the Detroit Symphony Orchestra, and others. Nicola offers his services at the harpsichord and organ throughout his current base in New York City, playing organ on Sundays at St. John in the Village and Christ & St. Stephen’s Church.