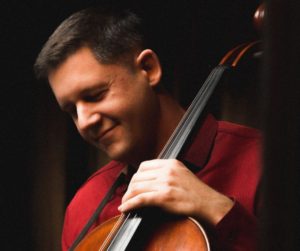 Nick Photinos, cellist, is a founding member and co-Artistic Director of the four-time Grammy Award-winning chamber music ensemble Eighth Blackbird. Formed in 1996, the group performs 50-60 concerts annually throughout the world and has been featured at the 2013 Grammy Awards, on CBS’s Sunday Morning, Bloomberg TV, and frequently in the New York Times. Recent accolades include being named Musical America’s Ensemble of the Year for 2017 and the inaugural Chamber Music America Visionary Award in 2016. Highlights of the 2017-2018 include their debut with the Philadelphia Orchestra in Jennifer Higdon’s concerto for sextet and orchestra, On a Wire; debuts in Milan and Turin, Italy and Budapest, Hungary; performances with Cincinnati Ballet; and performances across 11 US States. The 2016-17 season included debuts in Paris, at Justin Vernon’s (Bon Iver) and Aaron Dessner’s (The National) Eaux Claires Festival, with the San Francisco Symphony, a three-week return to Australia, as well as shows with indie-folk artist Bonnie Prince Billy (Will Oldham) and world premieres by Holly Harrison, Pulitzer Prize-winner David Lang, and Ned McGowan. In June 2017 Eighth Blackbird launched their annual summer festival, the Blackbird Creative Lab, a tuition-, room- and board- free chamber music festival. The ensemble has held multi-year residency positions at the Curtis Institute of Music, the University of Chicago, and currently holds an ongoing Ensemble-in-Residence position at the University of Richmond.

As a solo artist, Nick has toured with Björk, recorded with Wilco on their Grammy-nominated album The Whole Love, and recorded with Autumn Defense on their album Once Around. He has performed and recorded with numerous jazz artists including vocalists Sheila Jordan, pianist Laurence Hobgood, violinist Zach Brock, and bassist Matt Ulery, with whom he has been featured on three albums. He has also served as section cellist with the Canton and Columbus Symphony Orchestras and the Cabrillo Festival Orchestra. He teaches at the Bang on a Can Summer Festival every July in North Adams, MA. Nick is a graduate of Northwestern University, the Cincinnati College-Conservatory of Music, and the Oberlin Conservatory of Music. He has recorded for numerous labels including the Cedille, Nonesuch, New Amsterdam, Greenleaf, and Naxos labels. His debut solo album, Petits Artéfacts, featuring never-before recorded works by some of the most acclaimed names in new music, including David Lang, Andrew Norman, Bryce Dessner, David T. Little, Angélica Negrón, Florent Ghys, Molly Joyce, and Pascal Le Boeuf, will be released on the New Amsterdam label in late August, 2017.