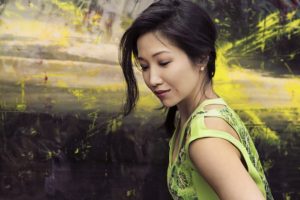 Born in Montréal, Canadian pianist Lucille Chung has been acclaimed for her “stylish and refined performances” by Gramophone magazine, “combining vigor and suppleness with natural eloquence and elegance” (Le Soir).

She made her debut at the age of ten with the Montréal Symphony Orchestra and Charles Dutoit subsequently invited her to be a featured soloist during the MSO Asian Tour in 1989. Since then, Chung has performed an extensive concerto repertoire with over 65 leading orchestras such as the Philadelphia Orchestra, Moscow Virtuosi, BBC National Orchestra of Wales, Flemish Radio Orchestra, the Seoul Philharmonic, KBS Orchestra, UNAM Philharmonic (Mexico), Israel Chamber Orchestra as well as all the major Canadian orchestras, including Montreal, Toronto, Vancouver, National Arts Centre (Ottawa), Calgary, Winnipeg and Metropolitain, among others.

As a recitalist she has performed in over 35 countries in prestigious venues such as the Wigmore Hall in London, New York’s Carnegie Hall and Lincoln Center, the Kennedy Center and Phillips Collection in Washington, D.C., the Dame Myra Hess Series in Chicago, the Concertgebouw in Amsterdam and the Palais des Beaux-Arts in Brussels. Festival appearances include the Verbier Festival in Switzerland, MDR Sommer Festival in Dresden, Lübecker Kammermusikfest, Santander International Festival in Spain, Felicja Blumental Festival in Israel, Music@Menlo and many more.

Chung is fluent in French, English, Korean, Italian, German and Russian. She and husband, pianist Alessio Bax, make their home in New York City and are artistic co-directors of the Dallas-based Joaquín Achúcarro Foundation.