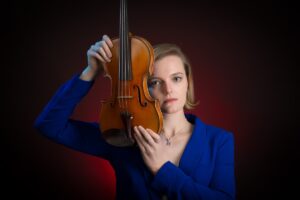 Hailed by Musical America for her “deliciously meaty” tone, violinist Kate Dreyfuss is an adventurous performer of classical and contemporary music. Based in New York and active throughout the United States, she is known for her “uncompromising commitment” and “fearless approach” (Cacophony Magazine) to performance.

A staunch advocate for the music of our time, Dreyfuss was a guest violinist with the quartet ETHEL during the 2018-19 season, and performed all four of Julia Wolfe’s string quartets with the ensemble at The Jewish Museum in New York City. Since 2014, she has premiered over 70 new works, and has collaborated closely with such composers as Matthew Barnson, Shih-Hui Chen, Andreia Pinto Correia, Donnacha Dennehy, Perry Goldstein, John Harbison, Takuma Itoh, Missy Mazzoli, Sarah Kirkland Snider, Dan Trueman, and Julia Wolfe.

Dreyfuss is a founding member of the violin-clarinet-percussion trio F-PLUS, a core member of the large ensemble Contemporaneous, and a frequent guest with the Boston-based ensemble Hub New Music. She has shared the stage with such renowned artists as Colin Carr, members of the Emerson String Quartet, and the Bang on a Can All-Stars, and has held fellowships at the Bowdoin International Music Festival and the Bang on a Can Summer Festival. She has also appeared at the Great Lakes Chamber Music Festival with F-PLUS, where the trio has been mentored by the Emerson String Quartet and Eighth Blackbird as part of the festival’s Shouse Institute for young, emerging chamber ensembles. Highlights of the 2019-20 season include a residency at Duke University, premieres of new works by Jessie Montgomery and Charles Peck in Princeton, NJ and Chicago, IL with F-PLUS, and a performance of the Debussy Violin Sonata and Schumann Piano Quintet on the Musica Reginae series in Queens, NY.

Dreyfuss is a Doctor of Musical Arts candidate at Stony Brook University, where she studies with Jennifer Frautschi and Arnaud Sussmann. She previously completed her Master of Music degree at Stony Brook, and earned her Bachelor of Arts in French literature, with honors, at Princeton University. Previous teachers include Elizabeth Chang and Louise Behrend at the Pre-College division of The Juilliard School, and Ryan Meehan of the Calidore String Quartet.