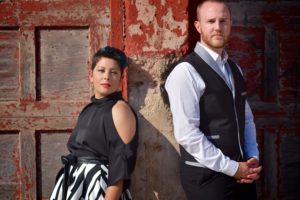 Juxtatonal [JUX] is a contemporary voice and cello duo performing music that juxtaposes tonality with atonality. JUX aims to legitimize playfulness on stage, find creativity in are creative art, and connect with audiences through compositions that blur the lines between music, art, and theater. JUX was founded by Detroit-based soprano, Jocelyn Zelasko, and NYC-based cellist, Bryan Hayslett after they met and performed together at Eighth Blackbird’s Creative Lab in June 2017.JUX’s debut performance at New Music Detroit’s Strange Beautiful Music Festival was described as, “a delightful mix of humor, storytelling, and musicianship” by pianist Dutcher Wright-Snedeker. Recent performances in Chicago and on Kerry Frumpkin’s Live from WFMT radio show were equally well received. Eighth Blackbird’s Nick Photinos says, “Juxtatonal brings a wide-eyed excitement and gritty intensity to their performances, which range far beyond voice and cello to include spoken word, piano, toy piano, and anything and everything else they can think of to deliver a gripping show. A true ensemble for the next generation! “On paper, Juxtatonal is a duo for voice and cello; however, both members also enjoy performance art and the playfulness of stepping away from their primary instruments. In developing their repertoire, JUX seeks living composers interested in pushing creative boundaries. The ensemble has commissioned 14 works from different composers. The pieces will be premiered during a North American tour in 2019 and recorded for release on a debut album to follow.