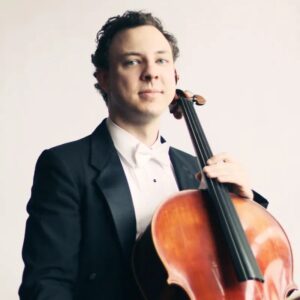 Jeremy Crosmer is a remarkable young artist—both as a cellist and a composer. He completed multiple graduate degrees from the University of Michigan in cello, composition and theory pedagogy, and received his D.M.A. in 2012 at age 24. From 2012 to 2017 he served as the Assistant Principal cellist in the Grand Rapids Symphony, and joined the Detroit Symphony Orchestra in May of 2017.

Crosmer is the composer and arranger for the GRS Music for Health Initiative, which pairs symphonic musicians with music therapists to bring classical music to hospitals. In March of 2017 the Helen DeVos Children’s Hospital launched a music channel that runs continuously, using four hours of meditative music composed by Jeremy and performed by musicians of the GRS.

Crosmer is a founding member of the modern music ensemble Latitude 49. He is also a current member of the band ESME—a duo that aims to broaden the education of classical music by bringing crossovers and mashups of pop and classical music to schools throughout Michigan. ESME released its first CD in December of 2016.

In April of 2013, Crosmer toured London with the Grand Valley State University Chamber Orchestra, performing the Boccherini G Major Concerto, No. 7. He performed the Vivaldi Double Concerto with Alicia Eppinga and the GRS in March of 2016. While still in school, Crosmer was awarded the prestigious Theodore Presser Graduate Music Award to publish, record and perform his Crosmer-Popper duets. He recorded the duets with Julie Albers, and both sheet music and CD recordings are available online.