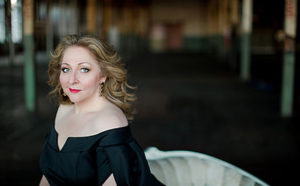 Goerke has received acclaim for her portrayals of the title roles in Elektra, Ariadne auf Naxos, Norma and ​Iphigénie en Tauride; “Kundry” in Parsifal, “Ortrud” in Lohengrin, “Leonore” in Fidelio, “Rosalinde” in Die Fledermaus, “Ellen Orford” in Peter Grimes, “Female Chorus” in The Rape of Lucretia, “Alice Ford” in Falstaff and “Madame Lidoine” in Dialogues des Carmelites.  Last season, she appeared as “Brünnhilde” in performances of Die Walküre with the New Zealand Symphony Orchestra.

Her recording of Vaughan Williams’ A Sea Symphony with Robert Spano and the Atlanta Symphony Orchestra won the 2003 Grammy Award for Best Classical Recording and Best Choral Performance.

Her close association with Robert Shaw yielded several recordings including the Brahms’ Liebeslieder Waltzes, Poulenc’s Stabat Mater, Szymanowski’s Stabat Mater and the Grammy-nominated recording of Dvořák’s Stabat Mater. Other recordings include the title role in ​Iphigénie en Tauride for Telarc and Britten’s War Requiem, which won the 1999 Grammy Award for Best Choral Performance.

This season, Goerke returned to the Royal Opera House Covent Garden in Elektra and the Metropolitan Opera as the “Dyer’s Wife” in Die Frau ohne Schatten.  She also appeared in concert performances of Elektra with David Robertson and the Sydney Symphony and in a recital in Tucson as part of the Desert Song Festival.  This summer she will return to the Glimmerglass Festival as Artist in Residence and for the title role in Ariadne auf Naxos. Among next season’s engagements are her first fully staged performances of Die Walküre at both the Canadian Opera Company and the Houston Grand Opera.

Other future plans include full Ring Cycle performances at the Lyric Opera of Chicago, the Metropolitan Opera, the Canadian Opera Company and the Houston Grand Opera.

Goerke was the recipient of the 2001 Richard Tucker Award.