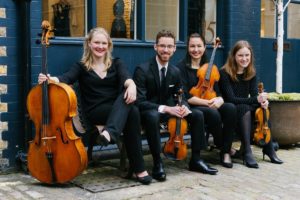 Formed in 2016 at the Cleveland Institute of Music, the Callisto Quartet brings together four dedicated and passionate musicians who share a love for chamber music. The quartet is based at CIM and works primarily with Si-Yan Darren Li and Peter Salaff. They have also had the opportunity to play in coachings and master classes for Mathieu Herzog, Noah Bendix-Balgley, Elliott Antokoletz and members of the Alban Berg, Belcea, Danish, Escher, Vermeer and Ying Quartets.

The Callisto Quartet was selected as the CIM Apprentice Quartet for 2017, a position which includes extensive education and performance activities throughout the Cleveland community and a recital on the Cleveland Chamber Music Society’s concert series. They are also featured as Ensemble-in-Residence at the Carolina Music Museum in Greenville, SC. The quartet was a prizewinner at the 2018 Wigmore Hall International String Quartet Competition, and was selected to compete in the 2018 Melbourne International Chamber Music Competition.

In the summer of 2017 the quartet received a fellowship to study at the Norfolk Chamber Music Festival with members of the Brentano, Miro and Emerson quartets. They have also attended the Juilliard String Quartet Seminar, the McGill International String Quartet Academy and the Robert Mann String Quartet Institute. In April 2018 they attended the Prussia Cove International Musicians Seminar where they were invited to study with Gerhard Schulz. Performances this past year include an appearance with David Geringas at the Cleveland Cello Society’s 20th anniversary concert.